From 7th to 10th November the exhibition centre of Verona hosted the 121 edition of Fieracavalli fair, where Longines was once again the protagonist as Partner and Official Timekeeper of Jumping Verona, for the only Italian leg of the Longines FEI World Cup, the most important indoor circuit of international show jumping.
Longines since 2013 is Partner, Official Timekeeper and Official Watch of FEI, and thanks to this collaboration is Title Partner of all the legs of Longines FEI World Cup and Longines FEI Nations Cup circuits.

Fieracavalli this year again hosted the fourth leg of the Western European round of the Longines FEI World Cup whose Grand Prix was staged on Sunday 10th November as a mixed class height 1.60 and a prize of € 190,000. Thanks to Longines I had the opportunity to walk the course with explanation direcly form Chef de Piste Uliano Vezzani who designed it.

To mark the time the Official Watch of the event: the Longines Conquest V.H.P. “Very High Precision” with silver dial that combines great precision, technical content and sporty look in respect of that elegance so dear to the brand. Representing a new milestone in the field of quartz, the timepiece hosts an exclusive movement renowned for its high degree of precision for an analog clock (± 5 seconds / year) and for the ability to reset the hands after a bump or exposure to a magnetic field thanks to the DPR system (gears detection system). 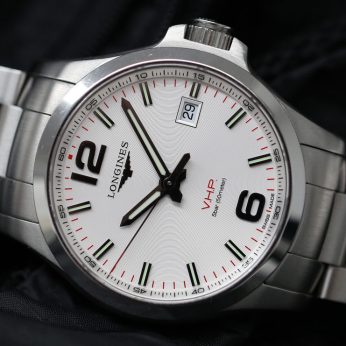